The Milky Way from Tenerife

This was taken on 11/09/2012 from the Parador Canadas del Teide, Tenerife at an altitude of 2150 metres, using a Canon EOS 600D with a Samyang 14mm. F2.8 very wide angle lens on a Polarie equatorial driven mount.
The exposure was a single shot of 49 secs. at ISO 1600. Enhanced with Photoshop Elements 10.


We arrived in the late evening very tired after the long journey and the difficult drive up the mountain through cloud and occasional drizzle. At the top it was so clear that I felt I must get some photographs taken in case this was the best night. I thought that this exposure had been spoiled as a solitary car came along the road with its headlights blazing. Fortunately, the final result was good, as the lights illuminated the Chapel and nearby hills briefly enough to get the foreground exposed correctly and not blurred by the movement of the mount.
Bill Hughes 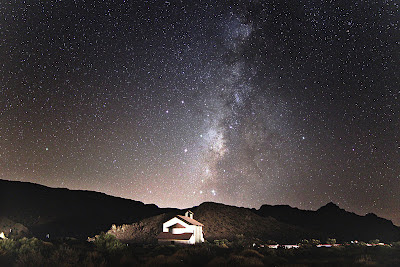 Although this is called the Photo Journal, there is no reason to make it exclusively so, so here is a text report on an activity taken by me, Peter Smith.

The sky was clear(ish) so joined Brian at Austerfield at about 9pm for an evening of just looking. I used Geraldine, the 14" Meade with the Meade 40mm SWA 2" eyepiece and the 26mm 1.25" eyepiece.


First a quick check of Alberio to judge the seeing, good, with nice gold and blue shining high in the sky.
Then a  broad look around using the lists on the wall of the dome.


Not necessarily the order in which I looked:
M31 The Andromeda Galaxy was beautiful – clear, bright and wide.
M57 The Ring Nebula -  nice blue doughnut.
N 6826 The Blinking Nebula, winked at me( in blue).
M76  and M27 The  two Dumbbell nebulae were quite visible, but difficult to make out the shapes clearly.
N6543 Cats eye nebula – I was definitely being looked at! Very clear.
N7662 The Blue Snowball – blue  but small.
N404 Mirach's Ghost faint but visible  - if you move Beta  Andromedae (Mirach) out of the eyepiece view (it's very close).
N7027 The Magic carpet nebulae – very small.
M52 a pretty cluster.
ET Cluster  (phone home!) - Beautiful
M29 a nice, small open cluster.
Neptune – very small but greeny blue.
M45 The Pleiades – although I need  binoculars – too big for Geraldine.


At 11.30 we broke for Tea. When we returned it was still clear but clouds threatening.
Tried for Uranus – low and in haze so went for Jupiter.
Jupiter very nice, but as I was  sorting eyepieces and filters to play with, the cloud god appeared.
So, we called it a night and went home. 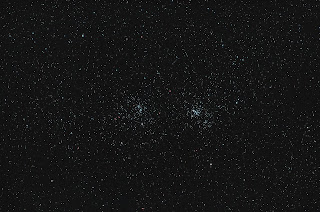 This was taken on the 7th of September 2012 from the Austerfield Observatory, as a test piece for a newly acquired Canon 550D, on the also newly acquired Takahashi FSQ106ED. The exposure was only 17x30sec, whereas my usual for this sort of subject would be an hour.
I used the camera's built-in feature for taking darks. The frames were acquired and pre-processed in Astroart, then finally processed in Photoshop. Colour had to be added for the blue stars and some of the red, but the large red ones had to be reduced in saturation. The focusing was done with the aid of Nebulosity and no sharpening was done in processing. Quite a mix of testing was done at the same time in this effort, and as is usual, there was more time spent on processing than on taking the frames. I'm reasonable pleased with the result, and particularly impressed with the tiny stars the combination seems to be able to produce.
Brian
No comments:
Labels: Open Clusters 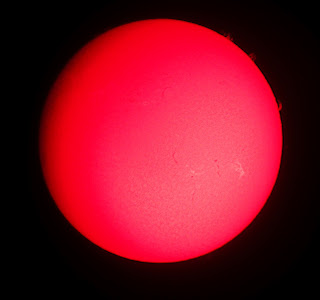 Taken on 8.9.12 during the first Austerfield Show, in the village of Austerfield about half a mile from the observatory.
It was a very hot day for all at the show. The Sun was on good behaviour for a change, visitors enjoyed looking through the Celestron 8" with a full diameter white light filter, which showed quite a few sun spots, but they were most impressed with the Coronado Solar Telescope, which showed a number of stunning prominences. This image was taken at 4:40pm with my Pentax digital camera placed at the Coronado's eye piece.
Sandra Crowther