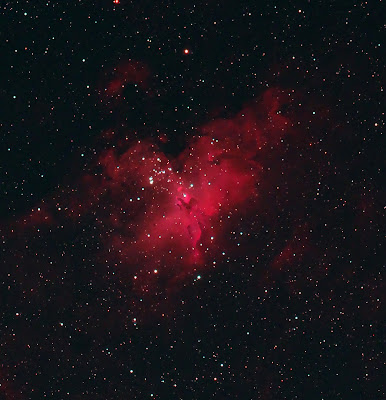 The Eagle Nebula, taken from Hatfield on 21.7.15, with a modified Canon 600D DSLR on a Takahashi 106 refractor 13 x 300s at iso800 using Nebulosity, AstroArt cropped and modified in Photoshop. Situated in Serpens it is part of a diffuse emission nebula and contains several active star forming gas and dust regions. 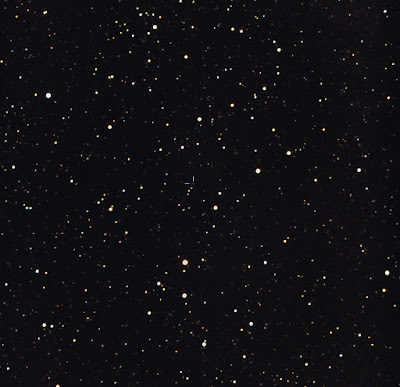 This was taken on 7.7.15 at 1:00am. from Austerfield. Pluto is marked and near the middle of the frame. It was done during a collimation session on the ODK12, just to finish off the evening. The camera used was a Canon DSLR 550D, set at ISO800 without filters, I should have added my usual IDAS filter but it wasn't needed for collimation and I didn't add it for this.
The 15 x 60sec frames were stacked by sigma-averaging in Astroart without calibration, then finally processed in Photoshop.
No comments:
Labels: Brian Joynes, Planets 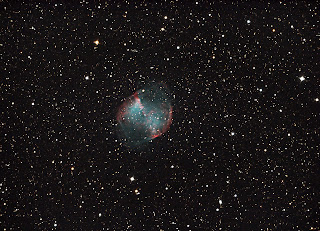 Taken during a collimation session on the ODK12 on the the 6th of July 2015. I felt I'd gone as far as the conditions and eyepieces allowed on that session, and spent half an hour taking this photograph to see the result of collimation by eyepiece, on a photograph.
The camera was my Canon 550D set at ISO800. 20 frames of 60sec each, no guiding, no darks and no flats. Nor did I use my usual IDAS filter. I Sigma-added the frames in groups of 5, then averaged the 4 groups, so the result had the equivalent of 5 mins of depth. The frames were pre-processed and stacked in Astroart then finally processed in Photoshop. 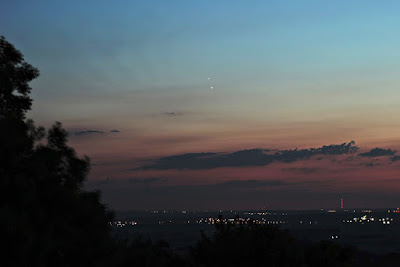 This one was taken by Bill Hughes from Gringley on the Hill. He used a Canon 600D with a 200mm F2.8, lens at ISO 200. It was taken on the same night and at the same time of course. Soon after that they set together. Gringley is, as the name suggests, on an isolated hill on the plain. Venus is the brighter. 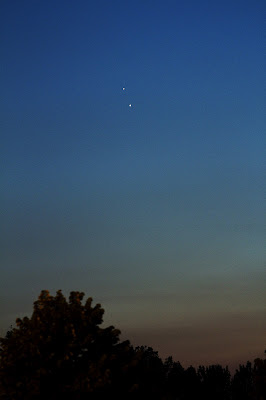