I have spent all morning trying to make a panorama of two of my aurora photos. It had to be done manually as the difference in time between the two photos meant that I could only merge the stars OR the landscape accurately. In the end the landscape had to win and the resultant picture covers a horizontal field of view of about 180 degrees. It gives a very good impression of how the auroral oval actually appeared (if you turned your head as far right and then left as far as it would go).
To the naked eye, the green of the aurora was obvious but all the other colours seemed to be silver and the “light pollution”was not obvious at all.
Bill Hughes 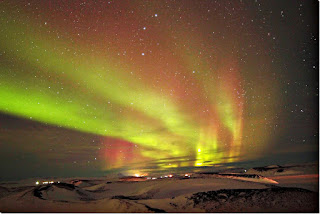 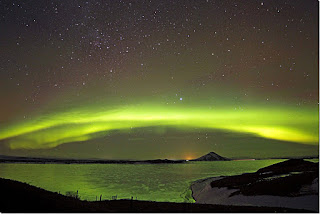 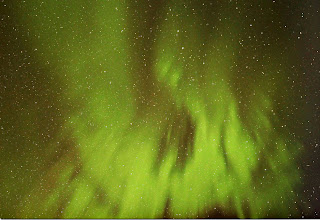 It seems we must get away from Britain to see clear skies, and another recent trip to Iceland by Bill Hughes this time, enabled him to take these.
He was luckier than others in having 4 clear nights with aurorae each night. His Canon 600D had a 14mm F2.8 lens set at ISO 1600 exposing for 25sec for each. Processed using Auto Smart Fix, Noise Ninja and Star Spikes, with a little help from Photoshop.
No comments:
Labels: Aurorae 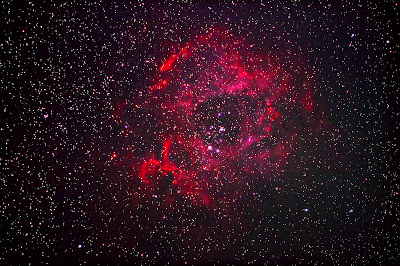 Taken by Rhys Owen, with a DSLR Canon 600, newly acquired and newly modified too, he obviously means business. The forecast was good, clear all night, but he must have had an inside source that told him it wasn't going to hold. He rushed in, set it all up and spent long enough focusing, and it takes some time to do it if you're using trial and error rather than software to do it.
A short couple of 30 sec shots to test and then on with a series of 20x60 sec frames at ISO800, followed by 4x60sec darks. He sat and ran them without any software control, counting them as they went. All I had to do was find the nebula and set the telescope to point at it and balance the mount suitably.
Almost as soon as he's done, the clouds started to roll in. He must have known.
The frames were stacked in Deep Sky Stacker and post processed in Photoshop to produce the final result.
1 comment:
Labels: Nebulae

Taken by Rhys Owen using his Canon 400 with a 50mm lens at ISO1600 for 10sec. He had the camera sat on a tripod but the deck of the ship wouldn't keep still. Unfortunately, he wasn't able to do it again from a more stable position as they didn't reappear when the ship docked. He plans to go back and do it all again. 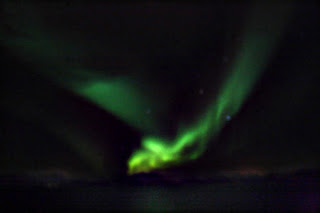 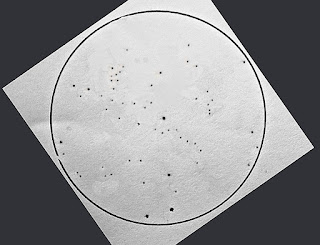 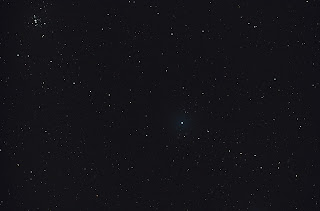 A poor night of heavy haze and thin streaky cloud, but we made the best of it. Peter was in the visual dome with the others and I was in the photographic, both working on Kemble's Cascade in Camelopardalis, and here are the results of that night.
Peter used a pencil and paper, his first time, while I used the Tak106 and the M25C, unguided.
Though the line of stars is easy to pick out in the eyepiece it isn't so easy on the screen from the frames taken. Though I took some 35 frames I used only 11, making the exposure 11x30sec. Processed in Astroart and Photoshop.
The drawing in fact does the object more justice than does the photograph, quite a pretty picture in the eyepiece, with the line of stars strewn either side of bright blue star, SAO 12969, and ending near the small Open Cluster NGC1502.
There were lots of arguments that night among the other observers as to its orientation on the laptop screen, as they all moved from the big Meade in the old dome to the laptop screen in  the new dome to compare, but the orientation I used gets it all onto the frame in a reasonable manner. Northwards is almost exactly from the bottom left corner to the top right. I've rotated and flipped Peter's drawing to match.
No comments:
Labels: Open Clusters
Newer Posts Older Posts Home
Subscribe to: Posts (Atom)