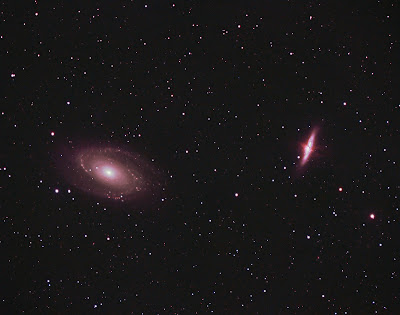 M82 is a starburst galaxy in the constellation Ursa Major. The starburst activity is thought to have been induced by the proximity of the larger neighbouring galaxy M81.The bipolar outflow is fuelled by  energy released by supernovae within clumps of very active, high surface brightness regions at the starburst core. There is no sign of the supernova seen in January 2014.
This image was taken with a SX Trius 694 camera on a Takahashi 106 refractor. 6x600s Ha exposures were added to 12x300s using a
uv filter as luminosity and to 5x300s red filter then combined with 4x300s green and 3x300s blue filters. Acquired in Nebulosity, stacked with flats the results were processed in Photoshop.
No comments:
Labels: Galaxies, Rhys Owen
Newer Posts Older Posts Home
Subscribe to: Posts (Atom)